A Quick Guide to the Beautiful Borough of Southwark

As you probably know the territory of modern-day London is divided into as many as 33 distinct areas called boroughs. One of those is Southwark, and actually, it ranks among the most attractive places to live in the capital right now. Here is what you should know about it.

Geographically located within the territory of inner London, Southwark covers 28.85 square kilometres and at the present moment has a population count of 314 200. The eponymous district which gives its name to the borough is the administrative centre that contains a concentration of retail outlets as well as several pretty well-known attractions that are flocked by tourists. If you want to explore the spirit of Southwark in full, you should not miss the chance to check out the following:

As you can see, Southwark can cater to every taste – galleries, museums and an abundance of opportunities for shopping. No matter whether it is for a short visit or because you will be living there, Southwark will be up to all your requirements. Its cosmopolitan spirit matched with good location on the South Bank of The Thames near the City, and its several relatively peaceful, almost suburban districts makes it indeed one of the best London Boroughs to settle down in.

The River Thames and the benefits for Southwark

One of the best districts to live or conduct business in Southwark is Bankside. The area is located right on the south bank of the River Thames. It is less than 2.5 kilometres away from Charing Cross and in addition to the close proximity to some of the busiest retail and commercial districts of the capital, Bankside itself is part of a business improvement district known as Better Bankside.

Southwark Street is the main artery there, and the majority of the employers in the district are to be found either on it or within a short distance from that street. Access to useful services such as professional end of tenancy cleaning in Bankside SE1 make living in the locality quite stress-free and pleasant.

Peace and comfort in the heart of London

Bermondsey, on the other hand, is a town within Southwark that would be more than perfect for people who are looking for an escape from the stress and strain of the busy urban environment but still would like to remain within the confinements of Inner London. This former town has a surprisingly suburban character and lies merely 4 kilometres away from Charing Cross. It is bordered by vital parts of the capital such as The City of London and Whitechapel to the north, and Deptford to the east. Southwark, the borough’s administrative centre is to the immediate west. Bermondsey has a rich history that can be traced back to the Anglo-Saxon period. The area is also famous for being home to the Millwall Football Club. Its home ground’s name is The Den, opened in 1993. If you are moving from a rented property in the vicinity, you will not have a hard time finding adequate and inexpensive end of tenancy cleaning in Bermondsey SE1 service. While the cleaners do what they do best, you can check out some of the area’s notable landmarks: the local antique market, Shad Museum, HMS Belfast and quite a few others.

The last district in Southwark that we would like to bring your attention to is Camberwell. Naturally, hassle-free end of tenancy cleaning in Camberwell SE5 can be found without a problem, but that’s not all good about the place. Camberwell Green is an extensive open green space around which the best places to live in the area are. The Salvation Army’s William Booth Memorial Training College towers over the landscape and is one of the most important buildings in the districts. Other architectural marvels of note include the Grade II listed Church of the Sacred Heart. The majority of the housing here consists of well-preserved Georgian terraces, mixed with some 20th-century developments that are pretty cosy too. 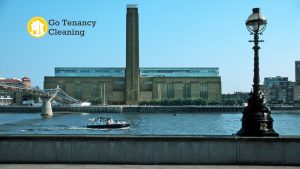 Now that you know so much about the London Borough of Southwark, it is time for you to explore it.

Caption: Tate Modern is one of Southwark’s best-known landmarks