A guide to Bexley

The Borough of Bexley is situated in the easternmost parts of London. It is classified as an outer borough and spreads over an area of 23.38 square miles which makes it the seventh largest borough of the English capital. Bexley has an estimate population of 240.000 and a density rate of 10.000 people per square mile. It is under the authority of the Bexley London Borough Council and is home to numerous internationally renowned districts, landmarks, entertainment venues, parklands and other places of interest.

Barnehurst, DA7, is an area which lies in the central parts of the borough at exactly 13 miles from Charing Cross. It is home to over 10.000 people and shares common boundaries with the districts of Crayford, Slade Green, Northumberland Heath and Barnes Cray. Lynhurst Chapel is perhaps the most noted edifice in the area as it was the first religious building in Barnehurst. The district is linked to the other parts of the city by its own railway station which was opened in 1895 and presently provides transportation services to over 1.7 million passengers on an annual basis. The area is preferred by tenants as rental fees are affordable and more importantly because they can use reliable end of tenancy cleaning services in Barnehurst when their lease agreement ends.

The town of Bexleyheath is identified in the London Plan as one of the 35 major centres in Greater London. It has a population of over 21.000 and lies at approximately 12 miles from the junction of Charing Cross. The Red House is arguably the area’s most famous landmark. The structure dates back to the mid-19th century and was designed by Philip Webb and William Morris. It is considered to be one of the finest examples of 19th century British architecture. Bexleyheath, DA6, is home to several well-known educational facilities including Townley Grammar School which was founded in 1937 and gained academy status in 2012. It is a girls’ only facility which becomes co-educational during the sixth form. It has a student body of 1.400.

Old Bexley is a district which is situated in the south-eastern parts of the borough. The church of St. Mary is beyond any doubt the area’s most popular building. The edifice’s most notable feature is its spire which mimics an octagonal cone which is sitting on top of a shortened pyramid. St. Mary’s isn’t the only notable religious structure in the district, other well-known churches in Old Bexley, DA5, and its surrounding areas are:

The district is mostly residential but has its own retail area which provides an abundance of services to the local inhabitants including top quality sanitation options. This means that local home owners, businesspersons and tenants can maintain their properties tidy by using affordable cleaning services in Old Bexley. The presence of capable and well-equipped professional sanitation experts gives the locals the peace of mind that their homes and places of work are always free of harmful particles. 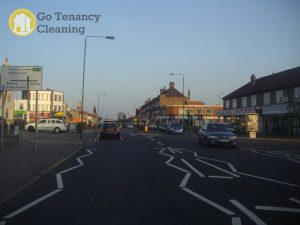 Blackfen, DA15, is a residential area with a population of about 10.000. It is located in the south-western parts of the Borough of Bexley and is known for its 1930s architecture. The district has two main shopping parades: The Oval and Blackfen Road. The former is also a local landmark as it is designated a Conservation Area by the local authorities. The Blackfen School for Girls is a secondary educational institution which converts into a co-educational school during the sixth form. It has academy status and presently provides high quality education to approximately 1.250 students between the ages of 11 and 19. Despite being a major residential district, Blackfen, DA15 isn’t served by its own tube or railway station. The nearest rail links are situated in the adjacent areas.

The district of Belvedere, DA17, is situated in the northern parts of Bexley. According to the latest census it has a population of about 12.000. For centuries the area was part of Lesness Heath in the county of Kent. The district is renowned for its Edwardian and Victorian architecture and is considered to be one of London’s most beautiful areas. During the years it has been the home of numerous notable people such as Billy Cornelius, Alec Debnam, Walter Donaldson, Anne Swithinbank, Flaxman Charles John Spurrell, Alan Knott and more. The district is home to several public service companies including a cleaning firm which facilitates the lives of the local residents as they can keep their properties properly sanitised by using licensed cleaning services in Belvedere.