Enfield – By Industry Ever Stronger

The London Borough of Enfield is situated in North London, England. The borough was formed midway through the nineteen sixties by a merger of three former municipal boroughs – those of Enfield, Edmonton and Southgate. The borough is almost entirely located in North London with the exception of few areas considered to be part of northwest London. Enfield is surrounded by the following localities (clockwise) – Hertfordshire to the north, Epping Forest (Essex) to the east, Haringey to the south, and Barnet to the west. The borough’s governing body is Enfield Council headquartered at the Civic Centre on Silver St, Enfield Town. Interesting fact – Tottenham Hotspur FC’s new training ground is now in Enfield at Bulls Cross EN2. 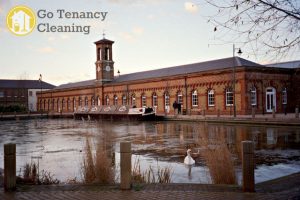 The original settlement from which the modern day borough formed dates back to at least 8th or 7th century AD. The village is recorded in the Doomsday Book of 1086, under the name Enfelde. The name morphed consecutively in spelling and pronunciation over the next four hundred or so years, until eventually it settled in its current spelling. The etymology of the name comes from Old English and refers to ‘land clearing owned by man called Eana’. The name also contains reference to what was later to become Enfield Chase (one of the royal hunting grounds).

The modern day borough began as a small market town (Enfield Town) about a day’s walk north of London. For many decades the British capital kept growing and expanding outwards, eventually reaching and engulfing Enfield Town, turning it into a residential district, connected to Central London via public transport. The new borough which formed in the nineteen sixties retained the heritage of its constituting districts in its new heraldic emblem (mostly used by Enfield Council) which shows the Enfield Beast – the creature formed by the armorial bearings of the former boroughs that were merged.

During the Roman period, Enfield was a place of activity and development. The town was connected directly to Londinium via what is now Ermine St. In those times, Ermine St was a major road leading all the way up to York. Archaelogical finds unearthed in the early 1900s show strong Roman presence, particularly under what is now Edmonton and Bush Hill Park. In the medieval period, Edmonton became an important strategic location for the defence of East Anglia against the Danes. The campaign against the Dane invasion was led by King Alfred the Great. For more detailed information on history and events which shaped the modern borough click here.

By Industry Ever Stronger 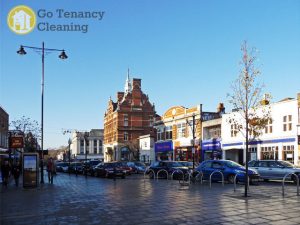 The borough’s motto reflects its industrial heritage. By far, the biggest industry in Enfield was armament production for the British Army. The Royal Small Arms Factory (near Brimsdown EN3) was the largest employer in the borough for many decades. Products such as the Lee-Enfield .303 rifle and other firearms were a standard issue for the British Army as late as the nineteen fifties. Other iconic guns manufactured at the Enfield Royal Small Arms Factory were the Bren and Sten machine guns (the ‘en’ indicating production in Enfield). Industry in Enfield wasn’t just about guns and ammo. Revolutionary technologies and products like the world’s first colour television set were invented and manufactured in Enfield by Ferguson Company (their plant is now closed down). An appliance we take for granted today – the dishwasher, was also first engineered and mass produced in Enfield by Hotpoint, their factory though is now closed as well. Technological innovation to have come from Enfield continues with the first ever ATM / cash machine in the world. This took place in 1967, the machine was installed in Barclays’ Enfield branch. The event is commemorated by a Blue English Heritage Plaque on the wall of the bank.

The borough of Enfield has undergone many changes during the decades, much like the rest of London. Since the early two thousands though, Enfield has seen much in terms of regeneration, redevelopment of derelict buildings and rejuvenation of public zones and facilities. A huge redevelopment project which began nearly twenty years ago in Edmonton Green is still going, and has transformed the area almost completely. In two thousand seven, Enfield Town Centre was on the receiving end of major redevelopment and renovation. The borough has diverse local economy represented by numerous businesses of all industries including companies engaged in professional end of tenancy cleaning in Arnos Grove N11. Residents and businesses on the look for efficient move out cleaning in Botany Bay EN2 are also covered.