The Borough of Camden lies in North West London and is classified as an inner area. It spreads over 8.4 square miles and according to the latest information gathering has a population of about 240.000 and a density rate of 29.000 people per square mile. Camden is comprised of 26 districts some of which are among the most famous in the city as they are the location of numerous prominent educational facilities, healthcare institutions, touristic sites, entertainment venues and parklands.

The area of Belsize Park, NW3, lies in the central parts of the borough at approximately three miles from the junction of Charing Cross. It is considered to be one of the most desirable residential districts of Camden as it shares common boundaries with several renowned neighbourhoods and is situated in close proximity to a number of well-reputed primary and secondary schools as well as Royal Free Hospital which is one of the finest healthcare facilities in London. The area is also home to a number of well-known services providers including high quality cleaning services in Belsize Park. The presence of a sanitation company allows local residents and businesspersons to maintain their properties clean and tiny with the aid of professional and fully equipped sanitation specialist. The district is linked to the other parts of the British capital by its own tube station which dates back to 1907 and sits on the Northern Line from the London Underground. It is used by over six million people annually.

Where the famous people live

Chalk Farm, NW5, is a small urban district with a population of about 25.000 which is adjacent to Belsize Park. The area is the location of Haverstock School which is a comprehensive secondary educational institution. It was the borough’s first private finance initiative school and was the subject of a major remodelling project in 2006. Some of its most popular graduates are:

Presently the school provides top quality education to an estimate of 1.250 boys and girls from the ages of 11 to 18. Chalk Farm is serves by its own tube station which was opened in 1907 and is classified as a Grade II structure. It is part of the London Underground network and provides transportation services to approximately 5.7 million people on a yearly basis.

The heart of the area 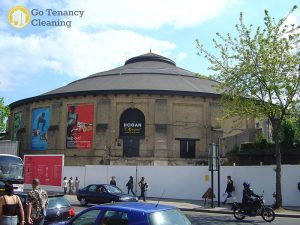 The district of Camden Town, NW1, is situated at about two miles from Charing Cross. It has a population of approximately 24.500 people and is identified in the London Plan as one of the 35 major centres in Greater London. The area is home to a number of historic places such as the Camden Catacombs, St. Pancras Old Church, Arlington House, The Most Holy Trinity Church, St. Michael’s Church, Greater London House and more. The Roundhouse is beyond any doubt the most famous entertainment venue in the district. It is housed in a former engine shed which dates back to 1846 and is listed as a Grade II* structure. The venue opened doors during the mid-1960s by Arnold Wesker who at the time established the Centre 42 Theatre Company. From 2004 to 2005 the Roudhouse was thoroughly renovated and today the venue has a maximum capacity of 3.300 standing and 1.700 seated spectators. The area is a looked-for residential neighbourhood as it is the base of many professional contractors who provide a myriad of services including reliable and affordable sanitation options in Camden Town. The presence of professional cleaners permits locals to keep their home and places of work properly sanitised while they handle their private and personal obligations.

Bloomsbury, WC1, is an area located in the southern parts of Camden which was developed by the Russell Family during the 17th and 18th centuries, and mostly planned and built by British property developer, James Burton. It has an estimate population of 11.000 people and is the location of numerous top tier educational facilities such as the University College of London, the London School of Hygiene and Tropical Medicine, the SOAS, University of London, Birkbeck and more. The district is also home to several famous exhibition venues including the British Museum which is the most visited gallery in the United Kingdom.